The Origins of the Myth 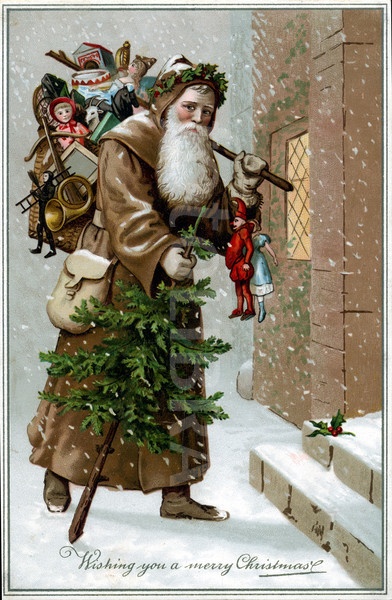 Who was Father Christmas? The real St. Nick, was a humanitarian known for his good deeds and his unassailable piety.[i] St Nick was first popularized through the writing of Washington Irving in Irving’s History of New York.[ii] A mythology about this man was developed by Clement Clark Moore who radically changed the image of St Nick through his short children’s story On the Night Before Christmas. In this story, St Nick is described as short, stout, with twinkling eyes; he touched his nose playfully when reaching a decision.[iii] St Nick arrived in the UK from the US in the 1860s[iv], to be enmeshed with the UK symbol of Father Christmas. Father Christmas was initially the personification of Christmas cheer, inviting his adult listeners to be merry and celebrate. He was always depicted as an old man with a beard, though his wardrobe would vary.[v] By the 1880s Father Christmas had melded with Santa Claus, the two names being used interchangeable to describe the jolly large man who delivered gifts to children. But did this Santa Claus/Father Christmas figure relate more directly to the mother or the father of the family? 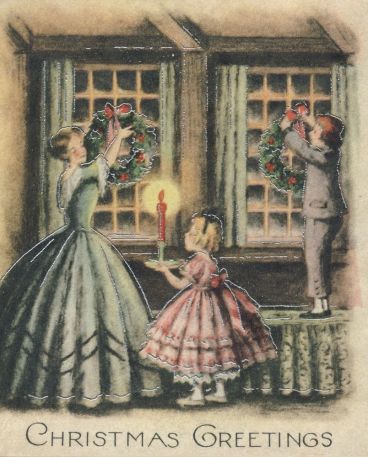 Victorian mothers were heart of the Christmas festival. If not for their detailed preparations, the new domestic Christmas of this age would not occur. Indeed, historian John Gillis noted, “it was on her skill and capacity and symbolic performance that the magic of the season rested.”[vi] Though previously men had been the chief artisans and organizers of family rituals, by the late 19th century it was women who held led held this role in the Victorian cult of domesticity.[vii]

The main way that women began to contribute to the Christmas season was by shopping for gifts. Though the actual provision of gifts remained the remit of the father through his wages, the acquisition of gifts fell to the mother. “Christmas was not only about the giving of gifts, but also the acquisition thereof… for these women played a very important part.”[ix] This was a new concept; in the 1870s men were still considered responsible for Christmas shopping, as illustrated in magazines which show fathers arriving home with arms full of gifts for the children. However, by the end of the 19th century these images were replaced by women arriving home with a carriage full of gifts.[x] This change is unsurprising, since by this time women were expected to do most of the shopping for the family for the rest of the year. This was such an important duty for wives and mothers that young girls would teach girls how to shop efficiently as part of their education.[xi] Christmas shopping afforded women new opportunities. First, it gave them a reason to venture from the private sphere of home into the public world of the department stores and shopping malls. Though women had not always been denied access to the public sphere, it had not been easily accessible.[xii] Secondly, it made shopping an acceptable, even honorable, activity for women. The rest of the year women might be chastised for excess in their shopping habits.[xiii] During Christmas, however, women’s shopping was justified by her desire to provide gifts to her children. “She was now characterized by correspondents in the women’s press as a model consumer, prepared to sacrifice her health and sanity so that the family could enjoy Christmas”[xiv] Thus women were the cause of this new Christmas season which centered on the family. Given their involvement is it fair to say they are actual ‘Santa Claus’ figure in the Victorian era – or ought this duty still rest with the men?

However, despite the heavy involvement of women in Christmas preparations, this mythical character was associated largely with the fathers, rather than the mothers in the Victorian era. First, Santa Claus was a mirror for middle-class fatherhood. As work had separated from the home through urbanization in the 18th and 19th centuries, many middle-class families experienced absent fathers. Armstrong suggested that the Santa Claus myth could be used for “overcoming the absence of a Father.”[xv] Secondly, the role of Santa Claus[xvi] allowed fathers to regress into childhood nostalgia, “exchanging the role of breadwinner for altruistic gift-giver.”[xvii] The image of Father Christmas was considered a significant example of fatherly generosity.[xviii]  Thirdly, the rising consumerism of Christmas caused obstructed the direct role of fathers providing gifts for their children. A number of intermediaries were now involved in this process – as mentioned – including the mother/wife, shop assistants, advertisers, wholesalers, etc. A separate stocking full of gifts from Santa Claus would symbolically represent the direct provision of the father. “By having a separate stocking full of gifts from Santa Claus, the bonds between the child and the family patriarch could be reconnected.”[xix] And finally, the Santa Claus symbol was a masculine one which arose as a contradistinction to the motif of the ‘feminine Christmas’ emerging due to the -already mentioned- heavy involvement of mothers in creating and maintaining a festive Christmas.[xx] Thus, Santa Claus, being the main symbol of Christmas, was a masculine one; emphasizing once again the father’s role in the upkeep[xxi] of this holiday.[xxii]

Thus, the Father Christmas symbol must wholly be considered a masculine one. Although women should, undoubtedly, be acknowledged as being the true organizers of this holiday – and completing all the behind-the-scenes work – the Santa Claus motif was developed and popularized in contradistinction to the motherly involvement. It ensured that the fathers still held a central place in this holiday season; they were recognized as the ‘unseen providers’ at Christmas. Perhaps a behind-the-scenes look at Clement Clarke Moore’s story would have revealed the extensive work done by Mrs. Claus in accomplishing Santa’s yearly magic.

[iii] Ibid., p. 48. This description was a reprisal of the first governor of New Netherlands, Wouter Van Twiller

[xvi] Though there is not sufficient evidence to show that fathers frequently dressed up as Santa Claus during this period. Armstrong, N. (2015). “Father(ing) Christmas: Fatherhood, Gender and Modernity in Victorian and Edwardian England. In: T. Broughton and H. Rogers, ed., Gender and Fatherhood in the Nineteenth Century, 1st ed. New York: Palgrave Macmillan, p. 100.